It’s hard to put the “honey roast” into honey-roasted nuts when the conveyor system on the processing line doesn’t work because the honey roast flavor formulation has hardened between the belt and spindle. 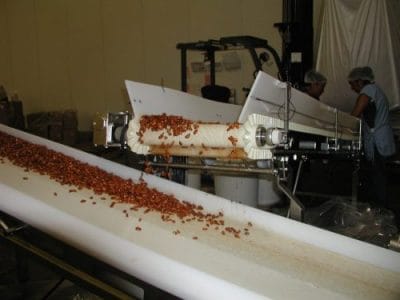 It’s even harder to free the conveyor of that sticky honey-roast formulation when the time to prep and clean the conveyor often takes 90 minutes or more.

Since 1999, New Century Snacks has perfected its custom blend and spice formulations for peanuts, almonds, cashews, Brazil nuts, pecans, walnuts, sunflower seeds and pepitas. On a daily basis, the company roasts and seasons more than 75,000 pounds of nuts and seeds, and blends together between 40,000 and 60,000 pounds of mixes. Now that’s a lot of nuts and seeds. But when one of the conveyor systems is consistently down for maintenance, those daily numbers can start to drop.

The trouble on the honey-roasted processing line started when the conveyor would be shut down for 10 or 15 minutes while employees were on break. During operation, nuts fall from a chute onto the moving conveyor. Employees then spray a specialized honey-roast flavor formulation onto the nuts as they move on the conveyor to additional processing down the line. 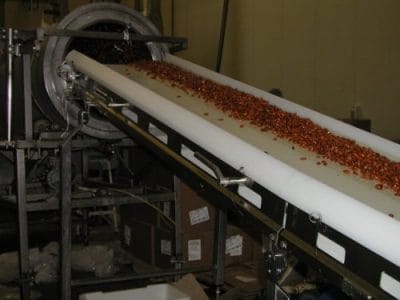 “With our old conveyors, they’d be so gummed up and so weak that we would have to clean them on more occasions, often two or three times a shift, just to get them going again,” said Marc Williamson, maintenance manager at New Century Snacks. “Basically, the problem we were having was the tack powder formulation would dry, and our guys would go on break, and when they come back and turned the conveyors back on, they wouldn’t move.”

The answer for Williamson proved to be two new Dorner AquaPruf 7600 Series sanitary conveyors. Designed solely for food, pharmaceutical and other industries that require conveyor systems with a high level of sanitation, the conveyor can be disassembled and cleaned in a matter of minutes — a timesaving attribute that’s benefiting New Century Snacks.

“It’s a beautiful thing how we can wash our new conveyors down,” Williamson said. “Before I’d have to wrap up the motor and control box with plastic and tape and still be careful washing it to make sure water wouldn’t’ get in there,” Williamson said it used to take at least 90 minutes to prep and clean the old conveyors. And when he was doing this two or three times a shift, the conveyors could be down several hours a day for cleaning. With his new AquaPruf 7600 Series conveyors, both are fully cleaned and ready for use in less than 10 minutes, he said.

“The time savings is just unreal,” he said. “You can lift up the nose bar on one side and completely loosen the belt. And using the belt lifters to hold up the belt, you can actually clean the top and bottom sides of the belt. Every single piece of metal inside the frame can be washed down.

“If I wanted to take the whole belt and conveyor apart, I could have it done in literally five minutes.” 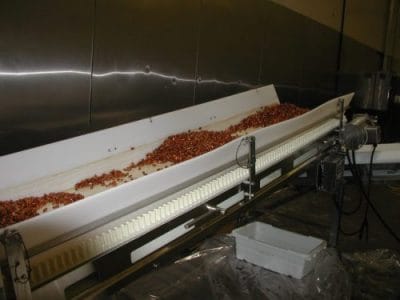 Another area of concern for Williamson was losing a large amount of nuts from rolling off the conveyor when they’d fall from the overhead chute. Dorner solved this problem by manufacturing the conveyor that receives the falling nuts with sidewalls on the belt. Sidewalls on the 7600 Series are completely washable and are manufactured directly onto the belt, resembling an “S” shape design to give it flexibility in rolling over the spindles.

“We used to lose a lot of product, but now we don’t lose any,” Williamson said. “We chose the Dorner conveyors specifically for our honey-roasted process and they’ve worked out perfectly for us.”

“It’s nice to be involved in something that helps people so much, and to have someone come back and say what a great improvement the conveyors have made,” Bruhns said. “That’s what we’re here for, and that is what made it so nice.”


Top
As a supplier to essential businesses, we are open and manufacturing conveyors to support the fight against COVID-19LEARN MORE
+